The Following books are available now on amazon.com or as print on demand from any bookstore.

When wealthy aristocrat Mark Delgado arrives at Eldorado for his nightly visit with his equally rich and pedigreed cousin, the beautiful Jeannie Murdock, he finds the door to her elegant 1840s raised cottage unexpectedly open, but no sign of her. A quick and desperate search of the house reveals a trail of blood leading through the house, down the exterior stairs, and to the driveway. Delgado calls the police, who quickly appear, and determine that Miss Murdock has likely been murdered, and her body moved. She’s found dead early the next morning in a thicket on the densely wooded property of her neighbor’s decaying antebellum mansion, Glenwood.

But the once elegant Glenwood is now inhabited along with its owners, by cows, chickens, hogs, cats, dogs, and other animals that roam freely through its open doors, destroying priceless furniture once owned by Confederate President Jefferson Davis, while meandering goats devour books from the former library of Confederate General Robert E. Lee’s former home, Arlington.

When the eccentric man and woman who live at Glenwood are arrested and charged with their neighbor’s murder, Los Angeles celebrity attorney Mark Solomon, intrigued with the case and the publicity it is certain to generate, arrives in Natchez on his firm’s Gulfstream jet. With his host of high-profile attorneys and his own press corps in tow, he expects to easily exonerate the defendants and quickly return home to L.A. Instead, he finds himself facing a determined district attorney with a distinct home field advantage, and his own `Dream Team’ immersed in a dark and many-layered culture which they don’t grasp, one which plays by its own rules.

There are others not directly involved in the matter who have their own reasons for making sure this case never goes to trial, and will stop at nothing short of murder, if necessary, to keep Solomon from representing the defendants. 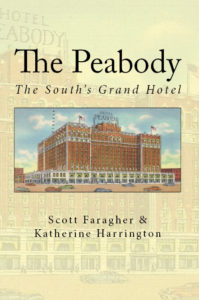 THE PEABODY By Scott Faragher & Katherine Harrington 210 Pages with around 200 vintage historic and current photos. Price: $19.95

`The Peabody Hotel’ was originally published by Arcadia in 2003. I was never satisfied with the book’s quality, production, or layout. Arcadia gave us a release and the book was completely reworked with dozens of additional images, and the information deleted by the original editor restored. Deathcat Media published it in 2018.

By 1869 Memphis had largely recovered from the Civil War and was poised to become the most important city in the South. When the first Peabody opened that same year at Main & Monroe, a tradition of elegance began which continues to this day with the current, second, 1925 Peabody. Between 1925 and 1960, the fame of the Peabody as `The South’s Finest, One of America’s Best’ became firmly established with its famous ducks, rooftop dancing to the top national acts of the day, and its exotic Skyway. But like many downtown hotels in the post WW II era, the Peabody suffered from the rise of suburbia, the basic end of rail passenger traffic, and a desire for everything new and modern. The Peabody was bought and sold several times before closing its doors, seemingly forever. But Memphis real estate mogul Jack Belz had other ideas, and after a hard fought, expensive, and time consuming effort lasting almost a decade, succeeded in fully restoring The Peabody, and revitalizing downtown Memphis in the process.

This interesting, informative book, by Scott Faragher & Katherine Harrington, the second in the Historic Hotel Series, contains nearly 200 images and photographs and traces the remarkable history of `The South’s Grand Hotel’ from its earliest days, into the present. 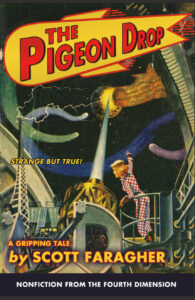 Marduk, the Supreme Leader of the powerful Secret Chiefs addressed the Councilmembers with the very ominous words, “Gentlemen, the earth needs to take a big crap and excrete these vile, disgusting, filthy, human rodents once and for all. They were fine as slave laborers when we created them to mine Rotanium on this planet. Since we no longer require that substance, they are, in effect, redundant. We will destroy this place with a one dimensional death star which will become three dimensional when it enters this galaxy. Their ignorant so-called scientists will think it an illusion, until it’s too late. Time factor? Three weeks. These disgusting wretches must be exterminated !” 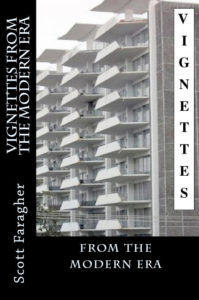 VIGNETTES FROM THE MODERN ERA By Scott Faragher. 140 pages with 37 photographs. Price: $14.95 This is available now but will be doubled in content by January 2022 with an expanded second edition.

Why Modern’? Because all are a series of events, snapshots, so to speak, with a specific beginning and end. And yet, nothing happens within a vacuum. Everything is interconnected. And why `Modern’? The present is always the modern era and post modern would therefore technically be, the future. But the modern in time, soon becomes the archaic. The fifty or so short stories included are true and happened to, or were witnessed by the author, and, or, persons he has known. They are what they are.

I look at these happenings in much the same way I look at a photograph, something fixed permanently in time, something defined by light, or its absence, and shutter speed. Everything which exists within a specific moment in time is ultimately part of a larger continuum, which hopefully survives, somehow, somewhere, despite its dissolution here.

“Don’t worry too much about the author. It is sufficient to know that he wrote the material included herein.”  D.R. Twine, MD 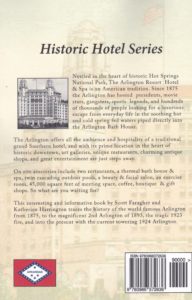 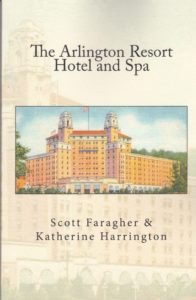 With its footprints in three centuries, the historic 500 room Arlington Hotel is one of America’s grand hotels. Originally built as a wood structure in 1875, the first hotel was replaced with a magnificent new all brick Arlington Hotel in 1893. It was designed to accommodate patrons from around the world who regularly visited Hot Springs National Park in search of cures for various ailments, or just to relax. It truly rivaled any hotel in America at the time, and patrons would often stay for weeks or months at a time. By 1920 Hot Springs was one of America’s most desirable resort destinations, with dozens of hotels catering to all classes of society. Sadly, a tragic fire destroyed the beautiful second Arlington in 1923. For a few brief days it looked like that was the end of the Arlington, which like the original, was located at the top of Bath House Row, literally within Hot Springs National Park. But the hotel was so popular and its owners so respected that financing was quickly arranged to build the even more massive and elegant 1924 Arlington, which still stands today at the top of Bath House Row, only now on private land. One can honestly state that Bath House Row begins outside its front door. All of the formerly grand hotels of Hot Springs, like the gigantic Eastman, and the Majestic are gone now, but the Arlington proudly remains This interesting and informative book by Scott Faragher & Katherine Harrington traces the history of the world famous Arlington from 1875, to the elegant 1893, through the fire which destroyed it to the current 1924 Arlington.

NONFICTION This is the story of a man I met in a bar in Las Vegas and what happened to him when he unexpectedly fell in love with a picture in a magazine, not so much the picture, but what it represented in the unconscious realm, in the Jungian sense. As the unconscious crossed over into the three dimensional world, his life was upended with the resultant loss of his family, his job, and his idea of who he had thought he was for the first 40 years or so of his life. He learned that hell is real, not a place, but a state of consciousness. In due time, he emerged on the other side of this definitely unasked for and unwanted experience as happier than he’d ever thought he’d been when he was at the pinnacle of his career success.

At first glance it sounds like the typical middle age crisis' many men go through, but it transpired on a much deeper and more destructive level. It is perhaps, more of a hero's journey, and a guidebook for any man who has attained success and is beginning to wonder if this is all there is. It is also a map of what to expect for the wife or girlfriend whose man suddenly seems `different’ all of a sudden.

My 50 plus years of car ownership have been interesting: crooked and inept mechanics, multiple fuel and electrical fires, leaking convertibles, British heaters and defrosters which made it worse inside the car than outside, wipers that never worked properly, oil leaks, strange engine noises, really hot floors, ominous sights, sounds, and smells of undetermined origin, exploding batteries, brake failure, tire blowouts, locked engines, and convertible tops and electric windows that defied the laws of gravity in reverse. While cars today are certainly more efficient, faster than anything from the `Muscle Car’ era, and definitely safer, they somehow seem more generic…digital, for lack of a better word, and in many instances even soulless.

Take a ride with me back to the call of the open road, when gas was cheap, car designers had the freedom to design whatever their minds could imagine, and American cars, music, and style were understandably the envy of the world.

BELOW is the black and white version of the above book with images in black and white only. It is identical in every other respect, with 300 + images, 385 pages, large 8.5 x 11″ format, same layout, etc. AVAILABLE NOW ! in paperback $24.99